Daniel Pharris rolled his fresh built out of Southern Speed Racing headquarters and went straight to Holly Springs Motorsports for the rescheduled Spring Shootout on June 5-7th. We debuted the car on Tuesday night with two mid-track passes to shake down the chassis, new 481X powerplant from Jeff Burns Racing Engines/ProLine Racing and get Daniel some seat time with his newly finished 3,600+ horsepower monster, now running in the Pro Drag Radial ranks on a 315 DR.

On our first full pass through the eighth-mile, we clicked off a 4.44 @ 170 miles per hour, which was the quickest pass Daniel has made to date in just his first pass in the car. On the fourth pass, we clicked off a 1.18 sixty foot and rolled some power in the twin-turbocharged Mustang to go into the 4.20 elapsed time range with a 4.26 @ 182 miles per hour. As qualifying wrapped up after three sessions, we sat in the #2 spot with a 4.23 @ 185 miles per hour to sit behind DeWayne Mills. We came back to repeat the 4.23 in R1 as we took a competition bye as our opponent did not make the call. Rolling into the semi-finals, 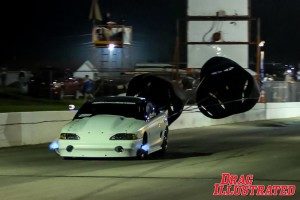 Daniel with the ‘chutes out and slowing down from another low 4-second pass at over 185 miles per hour.

Daniel defeated Enzo Pecchini with yet another personal best, 4.21 @ 189 miles per hour and set a date with #1 Qualifier, Mills, in the final round.

Bumping into the beams for the finals, Pharris rocked a huge holeshot advantage over Mills to catapult us to the event championship in our first outing and ran a new personal best of 4.13 @ 193 miles per hour to DeWayne’s 4.10 @ 197 miles per hour!

Daniel would like to thank Southern Speed Racing for all of their hard work and knowledge to build the car from the ground up and have it in the winner’s circle in the first outing. Daniel also would like to thank Jeff Burns Racing Engines, ProLine Racing, Racecraft, Inc., FuelTech, VP Racing Fuels, Pro Torque, Proformance Racing Transmissions and 74 Auto for all of their support of the Pharris Motorsports racing program!

Congrats Daniel, we’re proud to be a part of your team!

About the author: admin